Hints of Spring, Birds in the Olive Trees

The snow is gone from the olive trees after the 25-year snow storm and the birds have taken over the branches to try out their spring voices.

The old-time farmers say that the olive trees should be okay. They were covered in snow during the worst freezes, which should have protected them from the worst of it. We'll know for sure when it's time for the fruit to set.
I just dodged a bee! Is winter really over?

Posted by Umbria Bella at 3:14 AM No comments:

We're snowed in on Via Palombaro and the olive trees are loving it. The snow slowly seeps into the ground as it melts, giving the roots a good soak. In order for the new fruit to set, we need a temperatures below 55F or 21.1C, but not below 17F or -8.3C. Tonight we expect 29F.

See more about this in our app, Olive Oil IQ.
Posted by Umbria Bella at 5:43 AM No comments:

In the aftermath of the current olive oil scandal sweeping across Europe, four or five multi-nationals will be chastised for blending oils from several Mediterranean countries and selling them as 100% Italian, or, as Extra Virgin when they aren’t.  This European network of inter-locking corporations, defined by La Repubblica, the Italian newspaper (Dec. 26, 2011) as a cartel and an agro-mafia, will probably be fined.
Consumers across the globe will be left with a bad taste in their mouths, determined never again to buy Italian extra virgin olive oil, which has always been thought by many to be the best.

As a result, thousands of small independent producers, often with families dependent on the annual harvest to put the next year’s food on the table, will be unfairly tainted, tarred with the same brush as the mass market suppliers. They may be producing DOP oil (Protected Designation of Origin, an EU designation), recognized as the best regional extra virgin olive oil, but they might as well be making the same sorry swill stocked on the shelves of supermarket chains around the world.

Whose job is it to police the industry? There are regulations in place in the European Union and fraud units assigned to the daunting task of finding the cheats in the olive oil trade.  The U.S. passed regulations about olive oil categories in 2010, but they are voluntary. Nobody has enough inspectors. It’s the perfect situation for fraud.

So, what is the consumer who loves olive oil to do?
TTPPT:  Taste Trust Price Producer Travel
Taste.  Educate your palate, just as you would if you were buying wine. There are plenty of alternatives to mass-market olive oil. Specialized olive oil stores have opened around the world and many offer customers the opportunity to taste the oil before they buy it.  Look for the freshest oil. Don’t go for the clear bottles, which don’t protect the oil from spoilage as well as dark glass or tins. Use your oil in a few months and store it in a dark, cool spot.

Trust.   Find a specialty shop that sells oil and develop a relationship with the owner or buyer.  Ask them to set up a tasting of several oils or set one up yourself. (See how the professionals do it by downloading Olive Oil IQ to your smartphone or tablet).

Price.  You get what you pay for, just like when buying wine. You may come upon a jug wine or a mass produced olive oil that’s pretty good, but if you want DOP extra virgin olive oil, or a bottle of DOCG vino, you will have to pay more than 5 Euros or 5 pounds or 5 dollars for it if you want a product that has been picked and pressed by a local producer in the traditional way.

Producer.   Find the producers whose oil you like and ask your local shop to let you know when the new oil arrives. Every year will be slightly different, depending on the harvest conditions, but eventually you will recognize a group of labels that offer the oil you want.

Travel.   If you’ve followed the wine routes, think about traveling the olive oil routes. All across the Mediterranean, from Italy to Spain to France to Greece, as well as in the New World, there are places to taste and buy local extra virgin olive oil.  Often wineries will also produce oil, so check the websites of the wines you like. Make the experience a part of a culinary vacation, as way of educating yourself to know what good oil tastes like, as well as to experience the ambience that is an essential part of a local olive oil culture.

copyright Sharri Whiting 2012
Posted by Umbria Bella at 7:09 AM 1 comment:

As we mentioned in our app, Olive Oil IQ, the best Italian extra virgin olive oil to buy comes directly from small local producers, the coltivatori diretti; or from a local olive mill, the frantoio.  If you can't travel to Italy to buy your oil, look for a specialized food shop in your own country, where you may build a relationship and taste the oils they stock. More and more olive oil boutiques and gourmet food shops are opening up around the world, offering excellent extra virgin oils from both the Mediterranean and the New World.


High price is no guarantee, though. You need to taste the oil before you buy if you can; if that's not possible, purchase the smallest container available. If it doesn't please you, don't buy it again and notify the vendor of your dis-satisfaction.  Look for another brand, read reviews, try and try again. This is what you would do with wine, isn't it?


Recently, there has been a talk in the press about labelling fraud concerning extra virgin olive oil, especially in products marked Made in Italy. (See the Mislabelling and Fraud entry in Olive Oil IQ). There is an ongoing government investigation in Italy, which focuses primarily upon large producers and corporations who have blended Italian olive oil with oil from Spain, Greece, Tunisia and Morocco and labelled their products 100% Italian. As a rule, this kind of fraud is not coming from the small farmers and oil producers, who work so hard to produce the top quality extra virgin olive oil that Italy is famous for; rather, it is on a much larger scale.


According to La Repubblica, the Italian newspaper (12/23/2011), this fraud investigation does not concern badly stored or expired product; it is focused instead on huge corporations across Italy and the EU who import enormous quantities of oil in bulk from Mediterranean countries and label it as Italian. The provenance may be on the label, as required by law, but you'll need a magnifying glass to read it. This is financial fraud on a gigantic scale, which is being actively investigated. La Repubblica broke the story and it has now circled the world. Unfortunately, sometimes the story has become less about the investigation of the international agri-mafia and more an indictment of Italian olive oil in general, which is unfair to the small producers.

As the frantoista (person who operates an olive oil press) near Saragano in Umbria told us, the small local producers must follow the EU and Italian government regulations to the letter when they press and label their oil. Otherwise, word will spread quickly that something is amiss and they will be shut down. Smalltime growers bring their olives to press and remain there watching their crop as the olives move from fruit to juice, eventually pouring into their own containers.


This is the oil you want to buy.

Posted by Umbria Bella at 4:37 AM No comments:


One of the blogs we like best, Gadling, a part of Huffington Post, has included a story about Olive Oil IQ. Check it out to find great info and observations on travel, food, and more.


To everyone who downloaded OLIVE OIL IQ on iTunes, thank you very much. For those waiting for the Android version, it is now live and ready for downloading. We hope you enjoy this portable Olive Oil encyclopedia and we wish you Buone Feste, Buon Natale, and Buon Anno 2012! 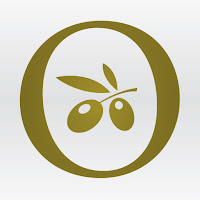 Posted by Umbria Bella at 12:40 PM No comments:

US Regulations on EVOO 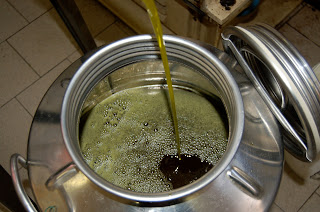 I'm sitting here, marveling at our new green extra virgin olive oil, made from the olives that grow in our field, and I'm thinking about some recent comments online that all Mediterranean oil tastes alike. This is so not true.


Like grapes, the taste of olives develops according to geography, soil, air, altitude, time of harvest, type of tree, and climate. So, my olives in Umbria will produce oil that tastes differently from somebody else’s in Liguria or Crete or Chile or California.

Unfortunately, many Americans, who often buy mass produced olive oil in the supermarket, have never had the chance to taste the really good stuff. The good news is that more olive oil specialty shops are opening across the US, as well as in France and northern Europe, making fresh oil more accessible. You'll find a whole section on tasting oils in my app, OLIVE OIL IQ.

There's a lot of talk about fraud and certainly some of it is true. It's really important to read the labels, but it's even more essential to try the oils. Buying olive oil is a lot like buying wine -- find a label you like by trial and error. But, unlike wine, you don't want to buy "aged" olive oil  and you don't want to keep it longer than three months after you've opened it.

In any case, when the regulations are lax, mis-labeling and fraud will seek the vacuum. In 2010, for the first time since 1948, the USDA revised its standards for olive oil, bringing them more closely in line with the standards adhered to by the International Olive Council and producers worldwide, including those in Spain, Greece, Italy, Portugal and Turkey. (The IOC is an intergovernmental UN agency representing over 95% of world olive oil production.)

The US is not a member of the IOC and the new US standards are voluntary, not required. The changes were requested by the US olive oil industry in an effort to create fairness in the marketplace-- their position was that because there was no precise definition for categories of olive oil in the US, unscrupulous blenders have been producing low quality olive oil and marketing it as extra virgin olive oil at a premium price.  Hopefully, these standards will make a significant difference in the quality of imported and domestic oil available to Americans.

My Italian husband remembers living in Denmark as a teen-ager, back when olive oil was only available in small bottles in the pharmacies. Imagine an Italian family with five children struggling to make pasta with an eyedropper of oil. Mamma mia, what a tragedy.  Today, olive oil is available everywhere, some brands better than others. Getting the best is a joint venture that includes regulations on both the sending and receiving ends of the process, as well as involved consumers who are willing to educate themselves about the product they are buying.

Posted by Umbria Bella at 11:00 AM No comments:

Posted by Umbria Bella at 5:00 AM No comments: